I got up early this morning, with visions of milkshakes dancing in my head. Don was also up early; he is heading to Highway 138, the northern border of Crater Lake National Park, and the northern end of Section C.

The hiking was easier for me today. I think my body has settled into a rhythm. I had a gentle downhill, then a gentle uphill, and then 4.5 miles of downhill slog. Oftentimes that’s the way it is, when coming in for a resupply. Resorts and such will often be at or near a pass, so the cars go up, and the hikers go down. Devil’s Peak was at about 7300 feet, and the trail south of there was mostly in the 6000-6500 ft range. By contrast, Fish Lake Resort is at 4650.

I reached Highway 140 at about 2:30, which was much sooner than I had anticipated. That’s always a great feeling! My plan was to hitch a few miles down the road, to Fish Lake.

I pulled out my groundcloth, which is a sheet of Tyvek, and on which I had written “PCT Hiker”. I positioned myself in a very visible location, and attempted to hitch for about half an hour. Alas, the 15 second hitch from a few days ago was not to be this time. Half an hour was the rough break-even time for hitch vs trail, and so I crossed the highway and found the back trail into Fish Lake.

The interesting thing about this trail is the lava outflows. Even the PCT campsite is built around one, although there are enough flat spots to make it work.

I set up my tent in the exact same section as last year, and got ready to go to the main part of the resort, about 0.2 mile around the lake shore. I put all of my camp gear inside my tent, emptied my pack, and then reloaded it with 1. every stitch of clothing I wasn’t wearing, 2. every last bit of trash I’d been carrying, 3. everything I needed to wash (think dishes), 4. my hiker wallet (ziploc bag), and 5. all of my electronics, especially my battery.

Before I left, I called Steve to let him know where I was. Oh, and to tell him that I was DONE with Section C! Just a minor detail!

I also shared my phone with Tea Bags, who was coordinating a pickup with his wife. Apparently she was a 2017 thru, but, like me, had been shut out of part of the trail. So she was sectioning to finish.

Anyway, I headed down to the café, and had a Burger!, Shake!, Salad!, and a Powerade.  I plugged my electronics in, and sat down to catch up on life off of the trail. The amusing thing was that, not two hours after my enormous dinner, I was ready for another. Good thing they serve breakfast too. 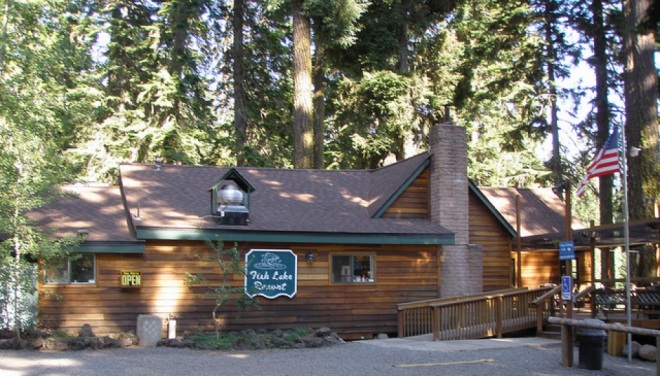 I checked around, but it seemed nobody was driving down to Ashland tomorrow. So I texted Devilfish, and he said he could be up there sometime in the early afternoon. What a guy!

I got some quarters and laundry detergent from the café, and then headed out to the washroom. I’ve developed a system, whereby I throw almost all of my filthy clothes in the washer, go to the shower, take a shower and wash the rest of my clothes with shampoo, and then wear them until they dry. It works pretty well, as the places I hike are mostly hot and dry in late July.

But the very best news of the day was that the Hendrix Fire closure is open! I can hike to the border! So from Callahan’s, I’ll be able to head south on Section R, just like I’d hoped to do last year. I am really stoked!

Tomorrow, I’m not setting my alarm, and I am getting breakfast. Win-win!