Only 12 miles today, but it was a long, steep downhill slog, with a net elevation loss of almost 5000 ft. I packed up my slightly drier gear, turned on a podcast, and headed out.

I was still schlepping the extra water, which was good. There were no water sources until near the end of the trail. This is also one of the dings against the main trail (as opposed to the alternate).

I rounded a corner, just before heading down, and suddenly I could hear a train whistle. Civilization kept intruding, little by little. Trains, road noise, airplanes…

The trail became wider, and the tread easier, until I hit the end. Cascade Locks, 2144.

I made my way in to town, passing a fruit stand (ice cold cherries!).

And then I stopped in at Cascade Ale House, where I found Sisyphus, Notion, Animal Lover, Lock, and Caps! It was old home week. I had a burger and a beer, took pictures, hung out, and all kinds of other stuff. I dropped some things in the hiker box, and just had a grand time. Big hat tip to Jules, the proprietor, who shared this picture of the trail registry! 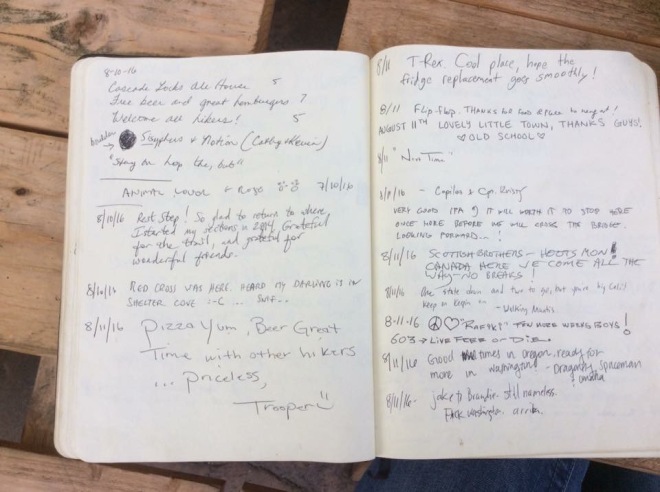 Steve and I ate dinner at the Ale House two years ago. But then I didn’t know anybody. This year, I am part of the hiker community, and the difference is awesome.

After I finished my dinner, I stopped at the grocery store to grab a bag of munchies, and then headed up to Shrek’s.

Shrek is overseas this year, but in his stead Sugar Mama, Strange Bird, MacGyver and Lilypad are holding down the fort. There were maybe 15 hikers there, with tents pitched all over the yard.

I grabbed a small piece of real estate, set up my tent, and went to take a shower. It was fantastic! Shrek had built a small add-on to his house, which included an entry way with a small bed, plus a bathroom with a shower and washer/dryer. Two girls, Zinger and Last Call, were hanging out while they washed their clothes. I hung out and chatted with them, waiting to wash the stench out of my laundry. Steve will never understand how much this simple gesture means to him.

While the majority of the 20-something hikers went down to the bar, I stayed up at Shrek’s and hung out. MacGyver and Lilypad wanted to know my story, so I sat down and told them a bit about me. I guess I’m a touch out of the ordinary, and that’s okay. MacGyver cooked up some chicken wings as well, which tasted incredible. Something about real food…

Steve will be here in the morning…can’t wait! It’s hard to believe that this half of my hike is over. I have learned so much, and pushed myself beyond what I thought I could do.