Today was a long plod. I chatted with my campsite-mates this morning, but the big focus was getting my rain-damp gear put away. It was foggy and damp yesterday, and it’s even more so today.

Indian Springs Campground 2125 is the jumpoff point for the Eagle Creek Alternate trail. This trail starts with a brutal descent before mellowing a bit and winding through several lovely waterfalls. The only beta I’ve had on this is that the first two miles are 1600 ft of loss, over nasty rocks. Because it’s been so foggy, I don’t think I’m going to do the alternate…why punish yourself when you can’t see anything anyway?

So once at Indian Springs, I bit the bullet and stayed on the main trail. Sigh.

A bit later, I came to Wahtum Lake 2128. It took awhile to find a spot to tank up (north end of the lake). I knew I might have no water source between here and Cascade Locks 2144, so I had to really fill up. 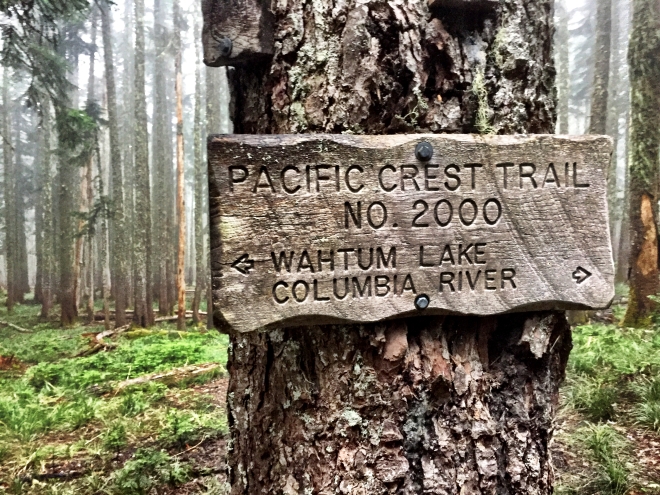 Then I took a wrong turn, which cost me maybe half an hour. My GPS is great, though, and it was an easy fix. But my destination for the night was a campsite at 2132, and by the time I’d climbed up the ridge, it was nearly dark.

Apparently, my camp-making fu is strong, because I got everything set up and nobody heard anything, according to reports from the next day.