Per my plan, I slept in. And then I didn’t get out of camp until noon. I did some much-deferred camp chores, but generally speaking I felt like a discouraged slug.

I left camp, and hiked over Minto Pass, where I ran into the trail crew. They were finishing up, and toting their tools and an enormous cross-cut saw. We chatted briefly, and I thanked them again for their work.

At 3+ miles, I hit Rockpile Lake 2012. It was gorgeous, and if I had had more gas in the tank the night before, I would have stayed there. Alas. 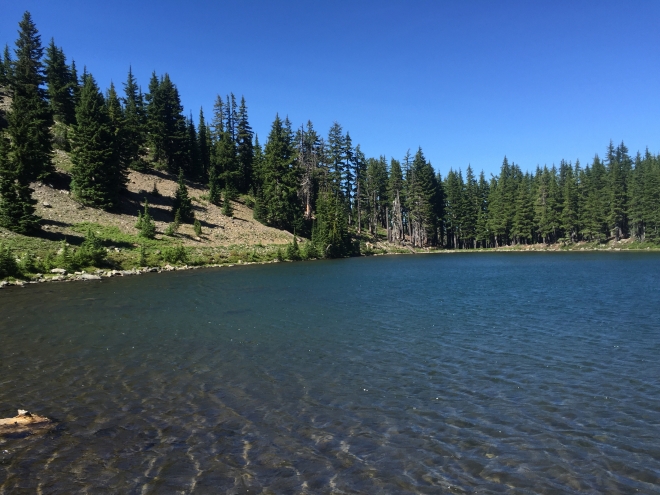 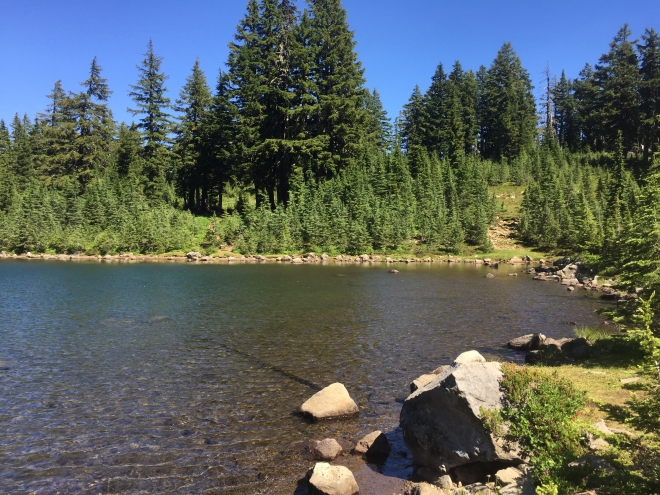 The proverbial straw was that I discovered I’d left my foam pad back at Wasco Lake. This is a 1/8″ thick pad which fits into the back of my pack. In the spirit of multi-use, it can be used to pad/support the pack, act as a sit pad, and add extra insulation/padding to a regular inflatable. I had cut this one to fit. And while the pack functions fine without the pad, it rides differently, and needs to be snugged up quite a bit to keep the weight from sliding around.

So there I was, short on miles, short on energy, short on time, with a heavy pack, and losing gear. I was *not* a happy camper.

After an hour (yes, a full hour…sigh), I had loaded up on water, poured calories into my system, and shouldered my New! Improved! pack, for the five miles to my evening’s goal.

Discouragement weighed on me, as I kept plugging along. In case the audience is curious, a long distance hike is absolutely not a frolic through the trees. Some of it is just that, but some of it is just plain hard work, and a lot of it is winning the mental game. It’s very easy to slip into negativity…trust me. One of the tricks you can use is the five-day rule. This states that if you truly want to quit, you have to wait five days before you bail. So in the spirit of the five-day rule, I wondered what the next five days would bring. And although I really had no idea what might happen, I figured I’d give it a try. Tune in on August 4 to see what the future held.

A couple of hours later, I neared my goal for the evening. And then I was suddenly blessed with a wildflower-strewn alpine meadow…only my favorite terrain in the high country. It was like God was saying, “It’s okay…I’ve got this.” 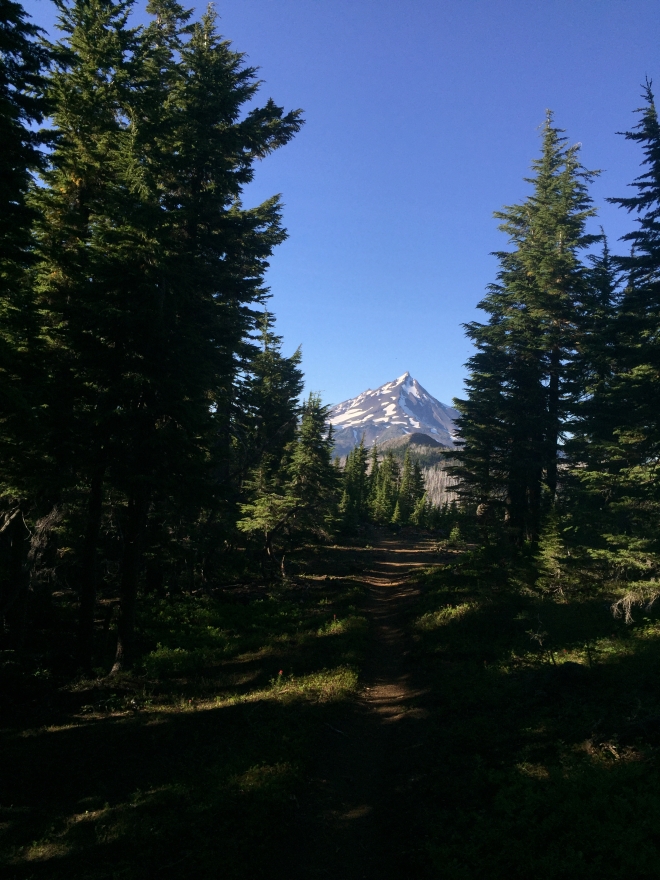 Then I rounded the corner to the campsite, and it held an in-your-face view of the south side of Mt. Jefferson. The sun was low in the sky, and the mountain reflected more and more alpenglow as the minutes went on.

I shared the site with Shower, a man about my age, who sported long blond hair and beard. He was doing 35s, to make a rendezvous with family at Timberline in a couple of days. He also told me that despite his looks, he was the retired Assistant Director of Fish and Wildlife for the state of California. That’s the thing about the trail…it’s the great equalizer.