Today was low and slow. With my physical stressors, I realized I just needed to take an easy day. I’m not very humble, at the best of times, so this was hard to admit. But it was the right thing to do. Plus, I’ve developed a breathing cadence which seems to work, not too deep, and not too fast. Add that to keeping my music going, and I can plug along.

I kept going up the hill this late this morning, and in a little over a mile, I hit the fourth stream. This was nicer than the second, and so I joined some more hikers for a water break.

There were four of us, including a guy from Houston, and a father/daughter pair from Melbourne. I mentioned that my friend Wendy lived in Box Hill, and of course they knew exactly where that was. Yet another connection!

Second breakfast and water gathering done, it was time to head up Devil’s Peak. I had heard ominous things about how steep it was. 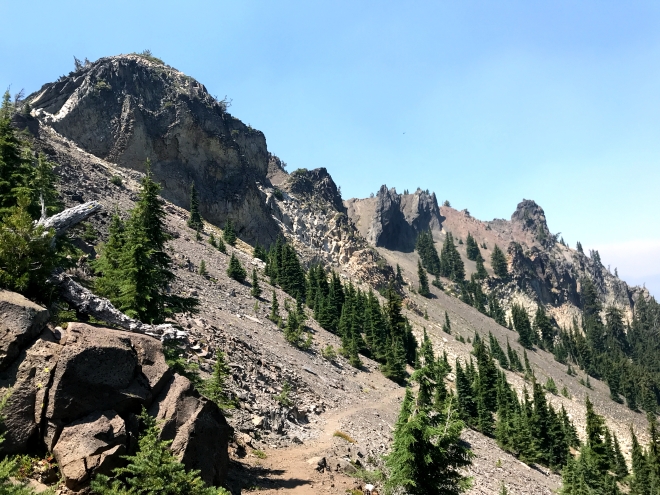 But for the last quarter mile or so, the trail turned into a talus slope. It looked an awful lot like the trails at home, and I absolutely know how to deal with these. With a smug grin, I pounded the rest of the way, up to the ridge.

Once I started the long, slow downhill, I started asking the NOBOs if they’d seen Snow Lakes. And none of them had. I knew the spur trail was difficult to find, so I prepared myself for some routefinding.

As I got closer, I resorted to my app, which plays with my GPS. I was hiking through yet another burn, so trail descriptions might or might not be accurate. Finally, I came across a laminated sign, which was dated 2017, and indicated that hikers needed to exit the PCT here, at the Snow Lakes trail.

The trail sign itself was difficult to see if you were NOBO, which explained why none of the hikers had seen it. And all the next day, I passed on the trail info to every NOBO who came my way.

Anyway. Once I’d figured it out, it was an easy spur, less than a quarter mile, downhill. And suddenly, boom! There was a lovely little lake, with a few tentsites. Water! Comfort! Yay! 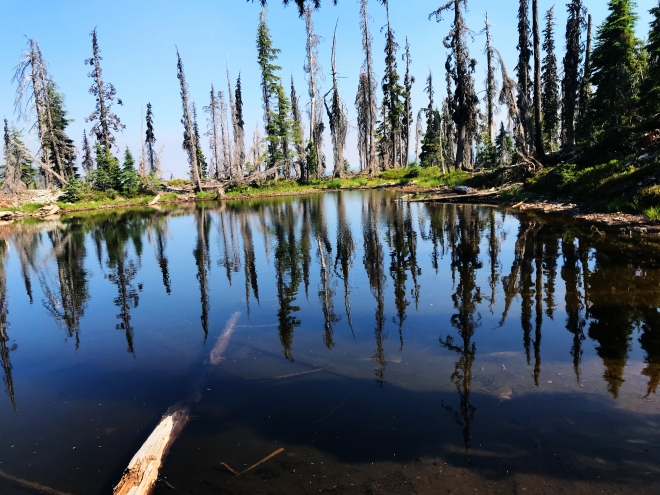 I set up my tent in the first site, threw everything inside, put on my conveniently waterproof camp shoes, and scooted out onto the lake, on one of several logs.

The water was clear on top, and so with a little careful finagling, I filled up all my water. It was a pretty little spot, and the water was quite warm.

Shortly afterwards, another hiker appeared. His name was Sisyphus, and he was from the Netherlands. We had the same general hiking philosophy, which is to take time and smell the roses. So even though he’s a thru, he’s not going to miss out just to make miles. It was wonderful to chat with a kindred spirit.

As usual, the smoke started rolling in around dinnertime. Today was pretty heavy, and when I woke up around midnight, the moon was deep red. I’m pretty sure it’s from the Hendrix Fire; I’ll confirm once I get to Fish Lake in a couple of days.