At a tiny, trailside campsite, next to a stream, Mile 2308

I slept in until 7:30, since I only have about nine miles on the agenda.  This pace is really frustrating…3 days for only 30 miles…but it’s the right thing to do, and I need to keep reminding myself of that. And best of all, I had zero pain today. That is a huge deal.

The hike today was easy, and gently downhill. I wove my way through wetlands, creeks, and lakes large and small…too many to count or even name. 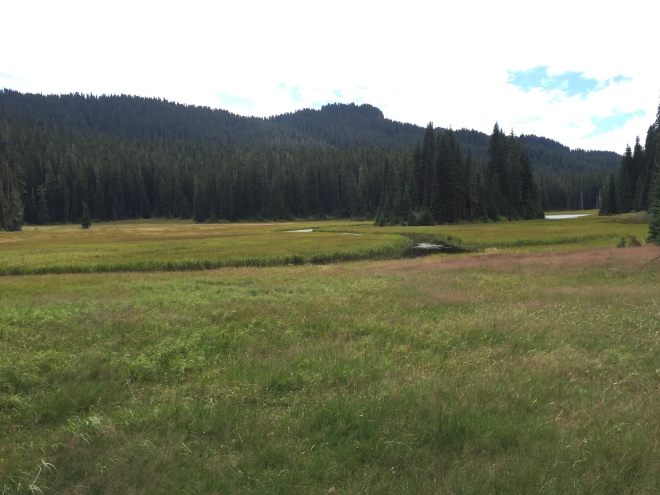 After five miles I crossed a lovely little stream with a wooden bridge, at 2305. I had my lunch, refilled my water, and did a little no-soap laundry. A side note: it’s pretty hard to de-crustify a pair of hiking socks, but several rinses in flowing water can help a bit. While I was at the bridge, I met a thru doing the same thing, and a sectioner. He was taking a break as well, waiting for the rest of his group. More on him later.

Eventually, I forded the Bumping River. With the water so low, this was basically a matter of hopping across logs and rocks, and I did great. Log and rock hopping have always been problematic for me, but I am getting much better at it. And with trail runners, I’ll often just plow across the water.

I arrived at my campsite at the stunningly early hour of 3:00. It’s literally trailside, with a couple of good logs for seats. I set up camp in no time at all, and decided to have a snack break while reading my book (Master and Commander; I’m going through the Canon again).

An hour or so later, a girl came down the trail (please note that if I use the word “girl,” it’s because they’re under age 25). Her trail name is Dr. Beeker, because she’s a huge Muppets fan. We chatted for a while, and eventually we headed down to the stream to top off.

And then, who should come along but Thermo!

Thermo, aka Thermometer, aka Yun Eun Jung, is a retired gentleman from Korea. He’s had a longtime dream of hiking the PCT. He speaks very, very little English. He flew to San Diego this spring, purchased all of his gear, loaded up his 50 lb. pack (shockingly heavy), and started off at Campo in April. He got his name from Blue Sky, when he kept checking his little keychain thermometer. Anyway, people got to know him, both in person and virtually, and every so often on the PCT Class of 2015 Facebook page, you’ll see a Thermo Sighting. He doesn’t use a computer, but his daughter, Yun Sol, speaks a moderate amount of English, and is on Facebook. So she told us about him, and we tag her whenever we have news of him.

It was one of my great hopes to meet him and take a picture together, and that just happened!  I tried to tell him that I saw his picture on the computer; I’m not sure how much he understood. But he definitely understood when I mentioned his daughter, and I hope she enjoys the picture of her dad.

Another group I met while in this campsite was the Fakarwiis Band (as in, sorry, Where the —). One of them was the sectioner I met at the bridge. They are a group of five gentlemen who do all kinds of outdoor things year round, every weekend, and once a year they have a longer trip. This year, it was White to Stevens Passes. I really enjoyed our conversation. As it turns out, the leader of this hike is a thru named Snickers, who finished at the Northern Terminus, and went south to meet his buddies at White Pass.

This is a great little campsite, because I get to chat with lots of people. I wouldn’t want it every night, but basically I’m a social creature on the trail. And the weather is nice, and Brendan has promised to show up at Chinook Pass on Tuesday, with some bagels and cream cheese. Mmmm!

Footnote: Thermo completed his thru hike in late August! After he got home, his daughter Yun Sol posted an update, and a video thank you from him. Many, many people responded with pictures of him on the trail, and he received many hundreds of likes. The community that gathered around this non-English-speaking gentleman is one of the great stories of the Trail.