I’m sitting here doing the dishes as I record my entry.

The day started with a smile. When I met Thermo yesterday, he gave me a hospitality gift of a little packet of Maxim coffee with cream. It was a really thoughtful gesture, and I thoroughly enjoyed it this morning. I’m looking forward to posting the picture of him and me on the Class of 2015 page.

Ten miles today, and 2100 ft gain…better but still incredibly slow. I will be very glad to increase the mileage after Chinook Pass.

This was the day I first crossed into Mt. Rainier National Park! After I hit the trail, I began climbing a ridge toward the boundary.

Suddenly, there was the sign. It was a great feeling of accomplishment. This was the first of a handful of signs, as the trail weaves in and out of the south and east sides of the park.

And a few minutes later, this. I saw several of these high quality metal signs in the park.

I met the Fakarwiis a couple of times today. Snickers, Fun Size, Waypoint, Windbreaker and B.L.T. had stopped for lunch at Two Lakes. It was the only water source, so I also hoofed it ¼ miles of steep downhill on a side trail. And there they were! They invited me over for lunch, and we had a great time. Turns out three of them are former Scoutmasters, so there was an instant camaraderie. And when they were talking about their wives and girlfriends, I quipped, “To wives and sweethearts: may they never meet.” And one of them looked at me with an enormous, knowing grin. Aubrey-Maturin FTW.

Shortly after lunch, I hit another boundary crossing.  I’m not sure where I crossed out of the park, but it’s fairly easy to miss small signs meant for the southbound traffic.

It gradually clouded up during the day, but I was able to see the Mountain.  I love the ever-larger views. 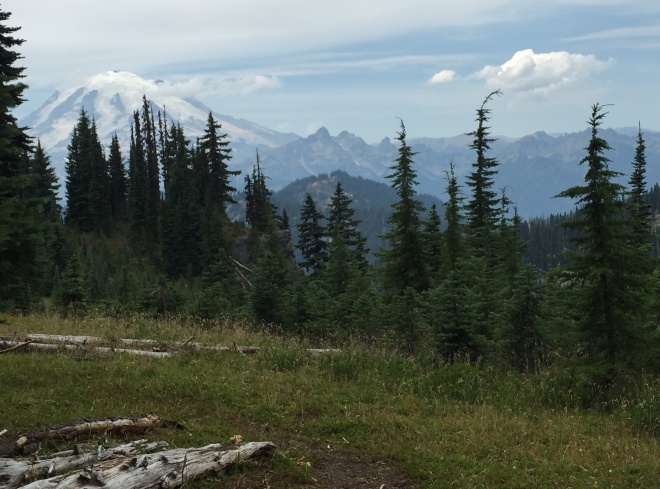 When I got to Dewey Lake, I met up with the Fakarwiis again. There are quite a few campsites, and I took one nearby but a bit off of the trail.

Within about five minutes of my arrival, the thunderstorm which had been threatening, unloaded. It starting dumping everything, everywhere, right as I was beginning to set up the tent. Fortunately, there was a little grove of trees in one corner of my campsite, so I just set up the tent in there and walked it out. Which was good. Tent is dry, everybody is happy. I climbed in, inflated my pad, and set everything out.  Time to relax.

While I’m thinking about it, I’ll share a bit about the inside of my tent. My pad is a Big Agnes Q-Core SL, which I discovered this year.  It’s the lightest weight insulated inflatable, at 17 oz and with an R value of 4.5.  I retired my NeoAir, and have really appreciated the extra warmth this trip. I also use an Exped air pillow. Once my pack is empty, I put it under the foot of my pad, to elevate my feet and reduce swelling overnight.

After my pad is set up, I attach my quilt.  From there, I take out my current day’s food and my Ursack with the rest, and various ziplocs: first aid, toiletries, repair kit, and map pack, plus my clothes stuff sack.  I also take out the must-stay-dry things, including my stash of unused maps and important papers, and my battery charger.

My food goes outside the tent, of course, and at night it all goes into the Ursack before I secure it to a tree outside of camp. My hydration system also goes outside, except for my drinks bottle, which is filled with clean water and placed by the side of the tent for the night.

I swap out maps at night when I’m planning next day’s route; I also plug in my electronics at night, and put them in the toe area of my quilt.

It’s a lot of juggling, but I’m getting much faster…like many things, it’s just a routine.

Anyway, once my camp was set up, and the rain had paused, I trotted down to the lake, only about a hundred feet away. I found a beautiful flat rock on which to scoop my water. And that water was incredibly clear…none of the silt you often find in a lake.  I filled up absolutely everything, which is a 2L Platypus collapsible bladder, another Platy at 1L, and a 3/4 L Smartwater bottle, with filtered water to use for clean water and drinks. If it weren’t for the storms, I would have taken a dip.

It rained and thundered on and off through the evening. It wasn’t huge, certainly not like mile 2200 in last year’s section, but it did keep rumbling in that vague Northwest fashion.

I headed to bed early, to get up early for the hike into Chinook Pass, and had a dry dinner to save time. Looking forward to seeing B tomorrow!

Footnote: The thunderstorms which were mild near Chinook Pass were stronger near Mt. Adams. Within 24 hours, smoke had reached north to our location, and the next day we learned that lightning had ignited the Cougar Creek Fire on Adams’ south side. This fire would eventually close the PCT in that area, necessitating a 23 mile road walk. The trail was reopened on September 8.