The wind kicked up quite a bit last night, enough so that I had to get up and snug down the tent. I didn’t know how it was over the ridge, but there’s no way I’d do the Knife’s Edge in that kind of wind. So I slept in a bit, to give the wind time to die down.

The other problem is that, well, there’s no water until after the Knife’s Edge. It’s a constant juggle of where I am, where I want to go, where the water is, and how my foot is doing.

So I got up, headed back down to the last water source, checked to see if there was a hose there that I dropped (yes, I retrieved it), and then headed out. Thank God, the wind died down. I was not about to do the Knife’s Edge with a howling crosswind. In talking with other hikers, it appears that the wind was local to the Cispus Drainage.

Before I left camp, I met a group of four retirees, out having a week’s worth of fun. We hit it off, and were leapfrogging throughout the morning. And I also met a group of three women from Tallahassee, and leapfrogged with them.

After descending into the drainage, it was (predictably) time to climb back up over the ridge, toward Snowgrass Flats. The weather was clear, and suddenly the eye candy began.

And all of a sudden, blam! There was Mt. Adams, appearing for the first time, now that the weather had cleared. One of the women from Tallahassee took a very nice picture of me. 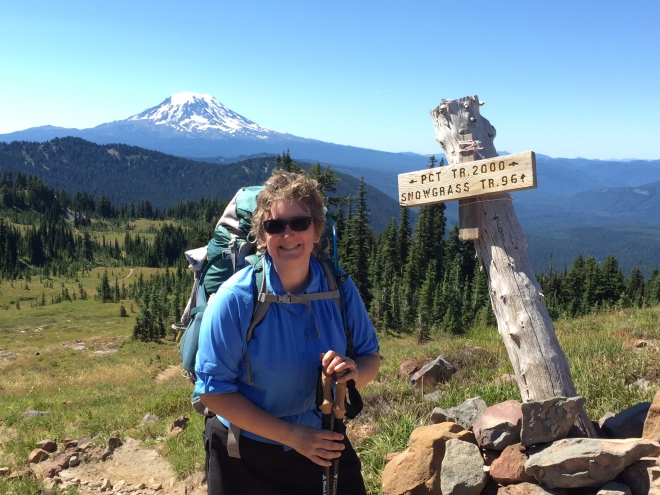 It was time to work our way around the next ridge, which included a lunch stop with all of the aforementioned folks.

And then, The Decision. Do I do the traditional route, which traverses Packwood Glacier, or do I do the Old Snowy Alternate, which scrambles steeply up and down Old Snowy, a mountain with year round snow and glaciers, plus lots of steep scree slopes.

I chose to do the traditional route. The only problem with that is that, well, there’s a glacier, with a 30 degree slope and no safe runout. Fortunately, there were footprints kicked in, so with some solid concentration, I safely crossed. And with the exceptionally low snow pack this year, the actual glacier was only about a hundred feet across. But the rest of the traverse was over an enormous talus slope, with refrigerator-sized boulders.  With my unique version of visual perception, and the ongoing pain in my ankle, it was a hell of a time getting across; I had to cross a slope, descend (read butt scoot), cross the glacier, and then re-ascend.

Once I crossed the slope, I headed up a ridge, and there was the Knife’s Edge!

It’s really, really pretty, and it’s not as dangerous as some of the slopes I’ve been on over the years. There were a couple of spots which made me stop and think “Oh, how interesting!” but for the most part it wasn’t too big of a deal. I would definitely not want to be up there in the dark, wind, or fog.

The trail winds along a very steep ridge, and around rocky knobs 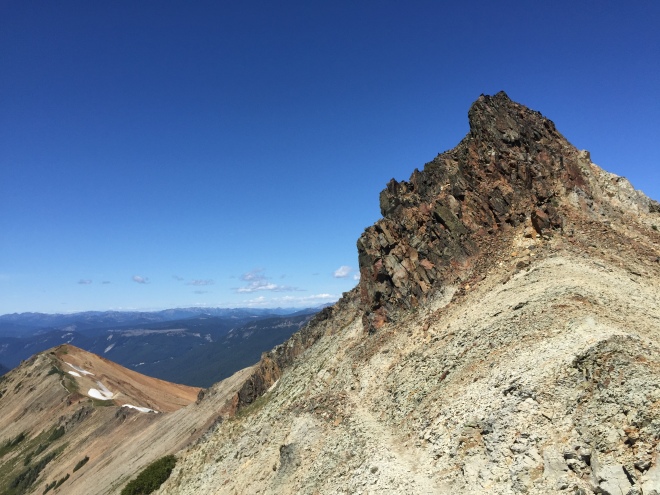 The trail gradually came off of the ridge, and then turned west at Elk Pass. It became a lovely meadow walk, heading gradually downhill, past the headwaters of several creeks, around Lutz Lake, and eventually to Tieton Pass.

When I finally made it down the series of ridges, to Elk Pass, it became apparent that my lovely forward progress, which probably averaged around ½ mph with the scree, talus, and photo ops, needed some help…if I were to make White Pass by Wednesday. So I dropped it in low and added another four miles before reaching camp around 8PM.

At this point, each and every step was a pain…quite literally. By the time I reached camp at Tieton Pass, I was just DONE. I knew I needed to be up by 5, to make it up the next ridge and then down again, given my slow forward progress, and given the closing time of the store at White Pass, where my resupply was waiting. So I pounded a Snickers bar for dinner, and crawled into bed.

Footnote 1: The talus slope/glacier traverse is notorious. A PCTA (Pacific Crest Trail Association) work crew spent a week in 2013 putting the trail back into place. The pictures give a good sense of what that area looks like. I didn’t use my camera while on the slope. Take a look at the link…it’s pretty incredible.

Footnote 2: I would later learn that during the rather miserable rain/wind/snow/fog the last week of August, some of my fellow hikers ended up crawling the entire length of the Knife’s Edge.