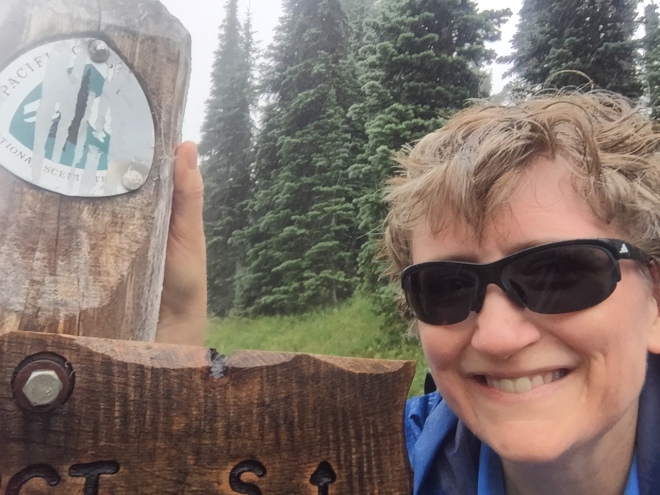 Today!!! I couldn’t believe it was finally here! We departed around 8:00, and arrived at the Divide Camp Trailhead at 9:30. After a quick picture, and goodbyes, I was OFF!!!

Divide Camp was open, finally. It had been closed for a couple of weeks, due to the Horseshoe/Mt. Adams Complex fire. That was now under control, and I headed up the newly opened trail. The rangers hadn’t been by to remove the tape, but that wasn’t a big deal…I was going north. I took a picture by my sign, and then I hit the trail, at PCT Mile 2239. Awesome!

Once I was on the trail, it started raining in earnest. I didn’t get my rainskirt out in time, so I got damper than I thought. This year, I’m hiking in a Purple Rain Adventure Skirt + compression shorts, and a Lightheart Gear sil nylon rainskirt. So far, through several day hikes, I like this combo better. I’m also using a Sierra Designs Ultralight Trench rain shell. It has a unique ventilation system, where the pack’s hip strap fastens underneath the jacket, by way of two flaps.

The ford across Adams Creek was challenging; it was up to my knees, fast, and opaque with silt. It was hard to see the trail on the opposite bank, but I got some tips from a couple of SOBOs (southbound thru hikers or sectioners). Because of the silt, I extended my poles and used them as probes. Mission accomplished.

After Adams, the trail was more or less downhill.

I met a very large Scout troop from Yakima. The kids weren’t too sure about me, but the Scoutmasters were nice enough. And I met a group of about five NOBOs (northbounders), as well as a ranger, all at Killen Creek, while I was getting my water. I’m carrying a 2L Platypus bladder with an inline filter, a 1L collapsible bladder, and a 0.75L Smartwater bottle, for clean water and drinks. I usually only fill the 2L bladder, unless I have a dry stretch coming up. I’ve arranged the 2L bladder so that it can also be used as a gravity feed filter in camp.

Several miles on, I found a nice campsite at Lava Springs, which (speaking of water) is known to have some of the best water on the entire trail. I thought the Scouts would be here, as there’s plenty of room, but apparently they stopped at Muddy Fork. Tonight, that was fine with me, as I really wanted some quiet.