Today was my last full day on the trail. I had decided a couple of days ago that I would be getting off trail at Seiad Valley.

My plans were also tempered by my fatigue and the smoke. If there was a way to meet my final goal without the last climb, and allow me to reach Seiad Valley around noon, I’d take it. The road allowed me to do that. It headed almost due south, instead of climbing west and curving back to reach Seiad. And I needed to be there in time to do my camp chores, have lunch at the café, and prepare for the twice-a-week bus into Yreka, first thing on the morning of the seventh.

The trail started up, with a bit of a vengeance…400 ft up in half a mile. But I plowed through through it…music on, breathing focused, not stopping for much of anything. From there, it was almost all bumps, flat with just a bit of up. And before I knew it, I was approaching Bear Dog Spring.

I asked a NOBO how far it was to the spring, and she chuckled, saying “Just ahead. Look for the sleeping hikers.”

Sure enough, just down the trail was a spur to the left and downhill, and a nicely shaded clearing to the right. And in that clearing was at least a dozen hikers. Some were snacking, some were relaxing, and several of them had pulled out their pads and were snoozing. Yes, hikers can sleep anywhere, at any time.

I said hi, and got my water stuff ready. I only had six more miles to go, so I didn’t need to fill up everything. I grabbed my water carriers and my filter, and headed down the spur.

Once again, the spring would have been puddles, no more, except for the ingenious placement of a couple of leaves. I waited my turn and filled up. Then I scooted back, filtered, pounded a liter, and got some more. With two clean liters, I headed back up to the clearing.

Almost all of the hikers had departed, but I did get to chat briefly with a NOBO, as he was packing up. He had been reading, but now he loaded things into his pack, finishing with his mascot, Frankie Fox. I don’t see mascots that often, so when they show up it’s always worth a smile.

The trail traversed a ridge for the next mile, and I finally started to see some wildflowers.

And then the trail headed downward. Cook and Green Pass is a full 2000 ft below the campsites at Alex Hole Spring, and most of that loss was in front of me. I tightened my laces, adjusted my pack, and began hiking toward my destination.

As if to say goodbye, the trail wound its way through the Abney Fire burn. This was part of the Miller Complex Fire, from 2017, which was one of the reasons I didn’t reach California last year. 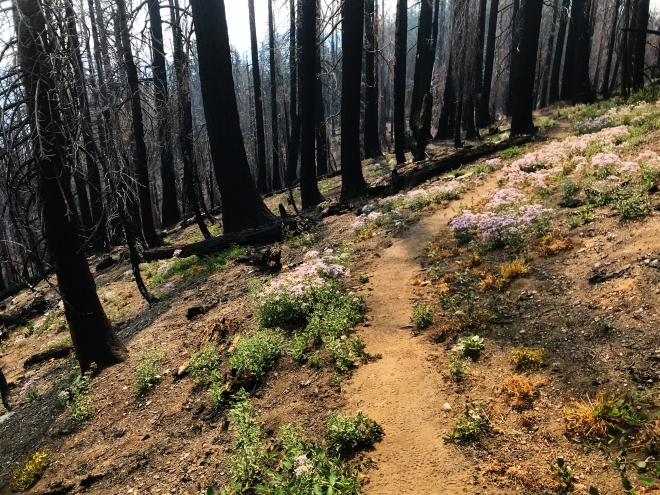 Past the burn was the rocky trail around Copper Butte. The red rocks were lovely in the late afternoon sun.

And then, I reached the pass. Cook and Green Pass is essentially the Siskiyou Gap. The southern portion of the gap was where I’d be heading in the morning.

I hiked up a short spur, loaded all of my water at a piped spring, and then picked a campsite. Several other hikers were coming in; we had probably a dozen when all was said and done.

I pitched my tent, had some dinner, and then attended to the most important part of the day.

When a hiker hits a significant milestone, it’s tradition for them to use stones, sticks, pine cones, or whatever is available, to mark that milestone on the trail. Now, it was my turn.

I gazed at the stones, almost overcome, while the rest of the hikers cheered.