As planned, I got up before dawn, and shuffled my water. I used my gallon to top off my carry, and poured the rest down my throat, with a lot of electrolytes.

Part of my chronic fatigue syndrome is the need for extra electrolytes, particularly salt. Each liter I drink is spiked with Nuun, or with Liquid I.V. (my favorite). I usually have two liters in camp, plus three-ish along the way. Naturally, the extra weight slows me down, which means I need more water, which means…you get the idea. Today’s plan was 3 liters, plus 3 liters tomorrow, for a titch over 13 lbs. Meh. My pack was a bitch.

I pounded two liters, topped off my six liter capacity, and headed out. The Pumice Flat trail is nearly flat, which made for a good warmup. I need about an hour to really get going, so the grade was very welcome. I plugged in my podcasts (today’s was Radiolab), and hiked approximately west. 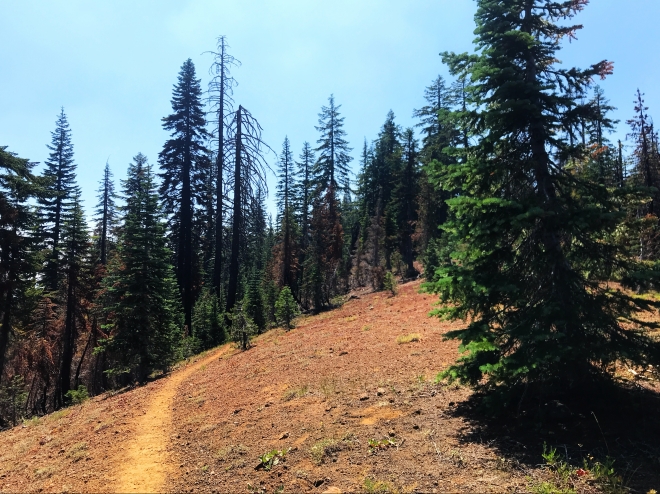 The fun part today was meeting more terrific people. At the junction of Pumice Flat Trail and the PCT, I met two groups of CLNP volunteer rangers. They were heading downhill on the Stuart Falls Trail, an alternate for the water-challenged. This had been an option for me, but last year’s fires destroyed the trails, and route-finding plus a handful of extra miles were not in the cards for me. Anyway, the guys were working on trail reconstruction. Again, I thanked them profusely.

I also met a guy from Amherst, MA. I have family there, and while he didn’t recognize their (unusual) name, he did recognize the name of my friend, Suzanne Palmer. It was only a “hey, I’ve heard of her” rather than “hey, we’ve been friends for years,” but it was fun nonetheless.

And I met a woman who was my age. She is NOBO (northbound), like virtually all hikers on the trail in the third week of July. She is also finishing the trail, just a few miles ahead. We stopped and chatted for awhile. She let me know that Jack Spring, which is always considered dry, had a little water. There is a cairn at the site of the (burned out) trail, with an arrow pointing in the ostensible direction of the pond. I made plans to check it out when I got there.

Today was the day I completed Crater Lake National Park, and entered the Sky Lakes Wilderness.

And on a much more serious note, today was the day I hiked through last year’s burn. There were other burns in the area, each pretty awful, but this one was shocking. It burned with such intensity that there was zero green coming back in. The slopes were 100% bare, and the snags were partially to mostly burned through. I’ve never seen anything like it.

I continued through more burns. The exposed trail got pretty hot, in addition to having ash. And the ever present smoke continued apace. It was not a pleasant day.

Late afternoon, I reached the Jack Spring Trail. Sure enough, there was the cairn and sign. I headed in the direction of the arrow, but I had zero luck. It was in a burn (naturally), so I didn’t need to do much route finding, but alas, the pond was not to be found. I did find out later that the pond existed. Devilfish posted a couple of pictures. Apparently I had not gone far enough; perhaps 500 feet were an understatement. But that didn’t help me this night.

I headed back north just a bit, where there were several campsites (in this case, just flat spots with a lot of debris), and tossed up my tent. I was pretty thirsty, and filthy beyond belief. It’s amazing how ash can get all over the place. I ate dinner with arguably the dirtiest hands I’ve ever had. I couldn’t wash up because I had to save all of my water. Such is life. Tomorrow, a stream.