I packed up my stuff this morning, and headed down to the Lodge to wait for the bus. We all piled in, slightly cross-eyed from the food and relaxation of the previous day.

The bus driver always stops at the bakery for about fifteen minutes, on the first run upvalley. All the passengers get front-of-the-line privileges, so that we can grab whatever we want before we hit the trail. I snagged a giant ginger cookie (as big as my hand), a ham and cheese croissant (bigger than my hand and twice as thick), and a huge ham and cheese sub (as big as my forearm) . Turns out that all of this food lasted me a full day. Darn.

I decided to spend a few minutes at the trailhead updating my journal. I said goodbye to everyone, got big hugs from Tim and Tyler, and then I sat down to record my voice memo. That accomplished, I headed up the trail to begin my last section.

I was moving like a slug today. Might have been all that food I recently consumed. In thinking about it, I realized that my food consumption schedule was out of whack compared to what I was used to…to say nothing of quality, quantity, and type. I’m sure this will shake out in a day or so. 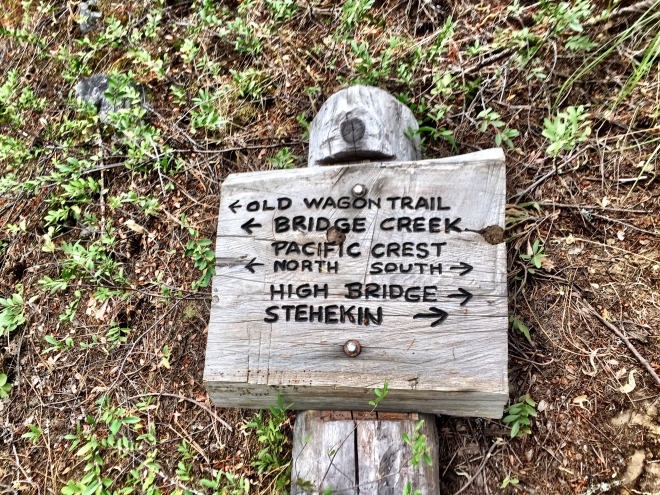 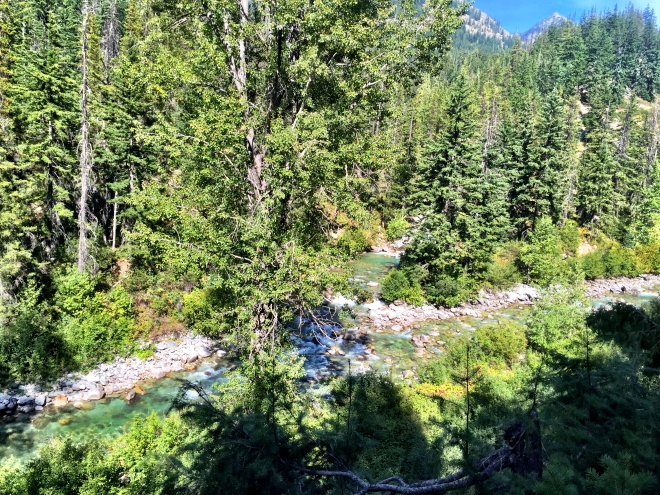 I passed through a couple of beautiful gorges, plus a reasonable amount of vertical. I came across Stoic, who had caught a later bus. He and I spent time getting water at Maple Creek, and of course I spent time falling into the water (sigh). It was warm enough that I dried quickly, and I said goodbye to him while making sure my gear was in order.

There are an abundance of black bears in this area. One of the hard and fast rules in North Cascades National Park is that you must secure your food and smellables (anything with a fragrance, like toothpaste and toiletries). The definition of “secure” varies throughout the park; the Thunder Creek area allows Ursacks, but tonight’s campsite requires the use of a bear wire.

I saw bear sign in a few places, including clawed trail signs, but I never saw nor heard a bear.

I reached the steep spur trail that led down to South Fork. It’s a huge area, with a horse camp hidden to one side, and two hiker sites much further down the spur. I met two hikers in my site, Mike and Sarah: he’s the superintendent for Death Valley National Monument, and she’s an interpretive ranger.

After getting my camp set up, I went down to Bridge Creek to get water. It was large enough that you’d have to think about a ford, but certainly not challenging at all at this time of year. I sat down on a rock and began to scoop water, when the rock shifted and I ended up in the drink again (sigh again). I finished my chores, brought the water back, and changed into my base layer before hanging up my wet stuff.

While I was enjoying my sub sandwich, another couple came along. They’re with the PCTA, and had been doing some trail maintenance. I gave them some solid beta on the thirty mile stretch of Section K, which was in desperate need of care.

They also said they’d seen Billy Goat, and gave a ride to him in Wenatchee. Apparently he’d finished at Stevens, and caught a ride east. His plan was to go to Wisconsin, and rack up some miles on the Ice Age Trail. And he’s going to be featured in an upcoming issue of Backpacker Magazine. Can’t wait to read it!

Pretty soon it was time to use the bear wire. What the fine folks in Stehekin had neglected to mention was that I needed to bring a 50 ft length of rope or paracord…the wire was only a wire. My only experience with a National Parks wire was one with multiple cables/carabiners, allowing you to hook up your food, pull it up, and then tie off the cable. Not so much here. Fortunately, Mike and Sarah had a large rope, and we clipped my Ursack to the pack they were using. Sigh. Knowledge is power.

Time to check my route for tomorrow, as I enter Section L!