I left my stealth camp fairly early, again to beat the heat. I needed to knock off the elevation gain before the sun was high in the sky.

Mid morning, I finally met the PCT! It was pretty awesome

I stopped at Red Pass, to enjoy the views and have an early lunch. It’s a lovely place, where you can see peaks on both sides of the crest.

And then I stepped off into new territory. Cool! The trail winds down into a huge basin, toward the White Chuck River drainage. Lovely streams were everywhere, along a gentle downward slope. The tread was easy; it was a wonderful section to be hiked on my first full day. 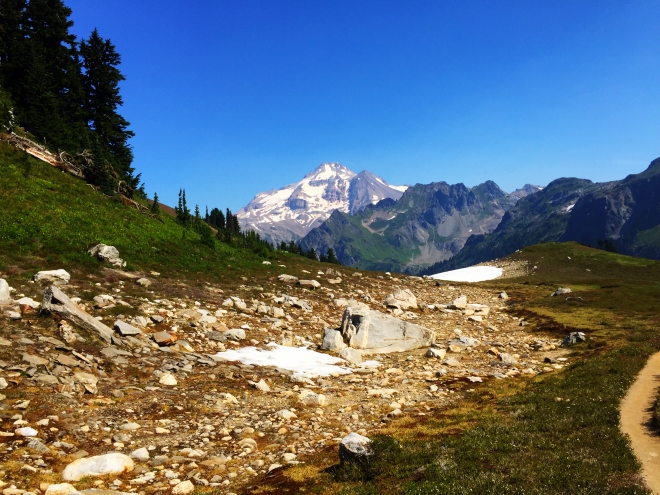 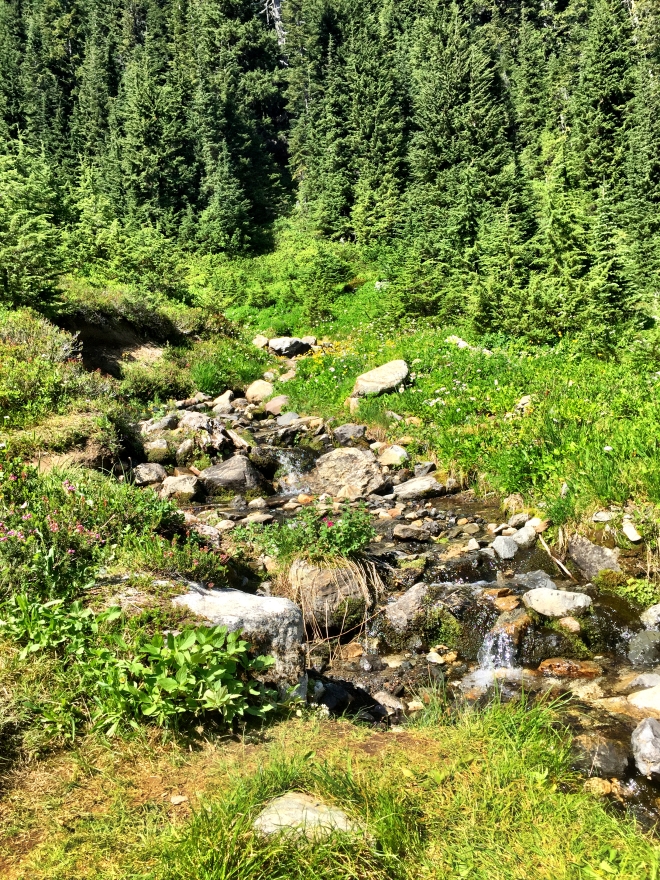 Suddenly I looked up, and there was Billy Goat! He is a legend among PCT hikers. He’s 77 years old, and spends almost all of his time hiking and walking. I gasped, “You’re Billy Goat!” and he smiled at me.

I told him it was a great privilege for me to meet him. He looked at me and asked if I ever felt discouraged. It seemed a bit unusual, but I said that, yes, I get discouraged all of the time.

He told me that he did too, and that his emotions will change ten or more times a day. Then he said to just ignore them, and keep on walking. Either he was reading my mind, or he knew what was ahead on the trail, or both.

Billy Goat has recently undergone heart surgery, and has Type 2 diabetes. But he just keeps going; with every setback, he keeps pushing to walk some more. In fact, he’s got 47,500 trail miles to his credit, and his goal is to hit 50,000 by his eightieth birthday. When I reiterated what a privilege it was to meet him, he looked slightly puzzled and asked why. I responded by saying that he was a reminder to us all to just keep walking.

We took a picture together, and he gave me a big hug, before heading south on the trail.

Words of wisdom: less than a tenth of a mile north was the beginning of Trail Hell, a 30+ mile stretch of massive blowdowns, thick overgrowth, and slumping trail; this was over 9000 feet elevation gain and 9000 feet loss. Not the worst trail I’ve ever seen, but it was relentless, and had a certain soul-sucking quality about it. I plowed on, aiming for Glacier Creek, five miles up the trail. Appropriate, I suppose, as my pace could only be described as glacial.

But I finally had the chance to cross a semi-famous bridge, which I’d been looking forward to seeing. In October 2003, Washington experienced a record-breaking storm. Bridges, trails, campgrounds, and roads in this area were damaged, or completely obliterated. A chunk of the PCT simply disappeared. The well-known Kennedy Hot Springs vanished under several feet of debris. Even the Skyline Bridge, with huge I-beams and concrete footings, was destroyed. This article, published shortly after the storm, describes the damage.

Comparatively speaking, the Kennedy Creek bridge survived intact. Nevertheless, it can be a tricky crossing when the spring snowmelt comes crashing down the creek. This day, the water was low. 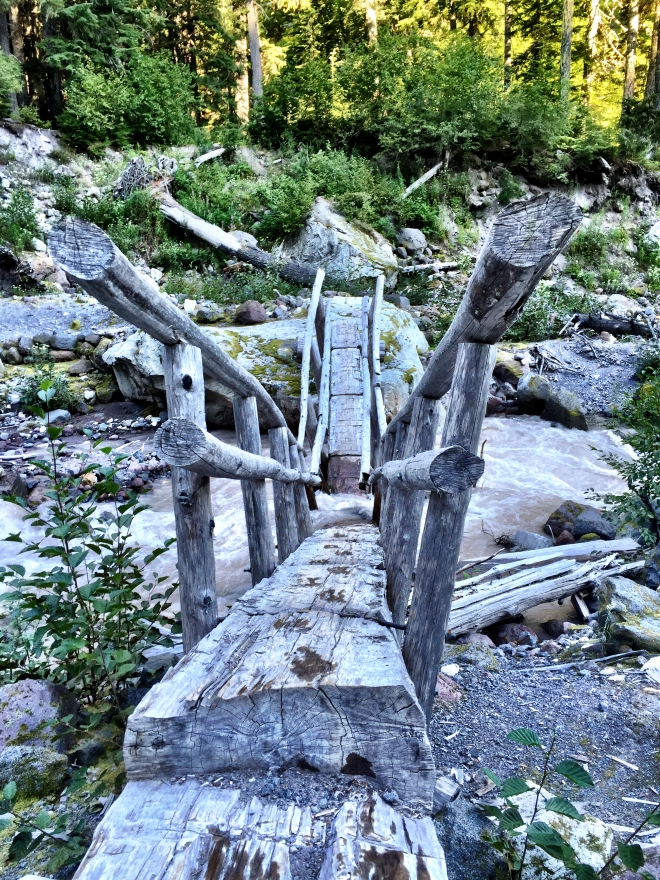 As I approached Glacier Creek, with darkness rapidly falling, I had to violate one of Liz’s Guiding Principles of Hiking…never hike with my clear lined bifocals, which increases the risk of stumbling by a significant margin. I got to the creek at the tail end of dusk, threw my tent on a flattish spot, and hit the rack.