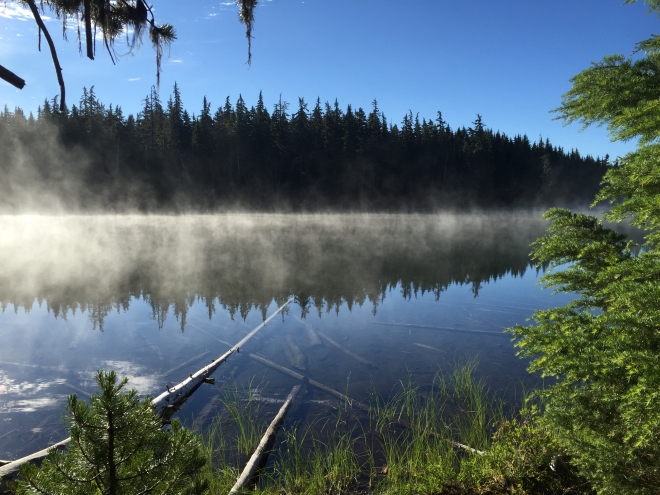 Just like that old camp classic, “Can’t go over it, Can’t go under it, Can’t go around it, Gotta go through it!”, each bit of fallen tree had to be negotiated in its own special way. Naturally, the one which required the most unflattering, face planting, butt-wiggling squirm was the one which had a Korean college student as a hidden witness.

Once I got up, dusted myself off, and tried to salvage what little dignity I had left (precisely none), the student leaped maybe four feet to the top log, bounced lithely to the second, and landed gracefully right in front of me. There was nothing for it except to introduce myself as Rest Step, and congratulate him on his gymnastic prowess.

The student introduced himself, but admitted he had no trail name yet. This, of course, was the perfect opportunity for me, and I bestowed his name: “Balance.”

Trail names are monikers used by a hiker on long distance trails, such as the PCT. In almost all cases, they are given by another hiker, based on something that happened on the trail. Very occasionally, as in my case, they are based on an interesting back story.

I finally hit the trail, and caught up with Ye On Il, who is 25. He and I had almost identical paces, and we hiked together for probably two hours. It turns out that he was a forestry major in college, and that one of his goals is to climb (you guessed it) Forester Pass, in the Sierra. So naturally, I had to bestow on him the name “Forester.”

And if that wasn’t enough, I met my first friend from the Women of the PCT Facebook group! Kim De Wolff is hopscotching her way toward completion of the trail. We recognized each other…apparently my trail name is known…and we chatted for probably fifteen minutes. What an awesome treat!

And if *that* wasn’t enough, I ran across another Women of the PCT friend! Brenda (aka Atta Girl) was heading south for her exit point. As often happens, she was carrying too much food. Ye On Il had just confided that their group’s latest resupply hadn’t happened, and so Brenda shared some of her excess. Trail Magic!

Shortly thereafter, I came to Horseshoe Lake, mile 1941. I shared a campsite with Jose, an opera singer from Vancouver, WA. He’s got three weeks between gigs, and wants to hike as much of Oregon as possible. More power to him!