I got up at 5:30, to give myself time to hit the trailhead at 10:00. The trail was five miles, traversing a bowl before climbing a ridge to a chairlift at Stevens Pass. I worked my way along the ski slopes, and finally down to the parking lot.

Brendan and Alex weren’t there yet, but I met a guy named Fred, who spends most of the year travelling in his van, just seeing different places. He was waiting for his monthly check to arrive (tomorrow), and was getting low on food. And lo and behold, here comes Brendan and Alex with an ENORMOUS vanload of chow. Perfect timing.

We stopped in Skykomish, at the Sky Deli, and I got my coveted BURGER AND SHAKE MMMM!! And then it was down the hill to Baring, and the Dinsmores.

Jerry greeted me with a big hug, and then the kiddos proceeded to unload the van. Eyes started popping in all directions. Not even thrus could put this much food away. They were incredibly grateful.

Andrea came out and gave me another big hug, and her eyes started bugging out as well. Most of the food will last quite well in the hiker dorm fridge, and Brendan ended up taking a bunch home, but there were some mighty happy hikers.

I was very grateful just to be here; I know this is where I’ll need to make my decision, and there’s no better place to do it than in the midst of the hiking community, with the very latest info.

Anyway, while the kids were feeding people, I started my laundry, grabbed a shower, and began sorting my resupply. Brendan had brought up my bounce bag as well. Many thrus or longer distance sectioners will have a bounce box. This contains things needed periodically, or sometime in the future, and is generally sent a few resupplies up the road. I have a duffel, which the family brings up whenever they meet me; it’s got a couple of sets of street clothes, some extra toiletries, and the like. It was nice to wear a cotton t-shirt while my hiking clothes were in the laundry. But even if I didn’t have the bag, the Dinsmores have a big stash of loaner clothes for laundry time. Last year, the favorite was a purple prom dress, which appeared several times in the annual hiker photo album which Andrea puts together.

Once I was done shuffling things, Brendan and Alex headed down the hill. I wish we’d had more time to hang out; seeing family has been a huge deal for me.

Another cool thing that happened was that I met Soul Sista (aka Ronnie). She’s done a lot of work with packs, and was able to help me get mine adjusted better. We ended up setting the height to halfway between small and xtra small. But ultimately, she couldn’t get it where it needed to be, and she strongly recommends I get a new pack. Maybe it’s time to take a look at the new Mariposa. Anyway, she is up here for a few weeks, camping on the 2 acres of lawn, and generally helping out. There are several people who come up here and pitch in during the summer, cooking, repairing, driving folks, etc. Did I say this community is awesome?

I slept in the hiker dorm last night. Since Jerry and Andrea introduced a No Alcohol policy, there’s no reason to stay up late and party. The lights were out by ten. Of course, maybe that was because we were all excited about having a Real Bed! 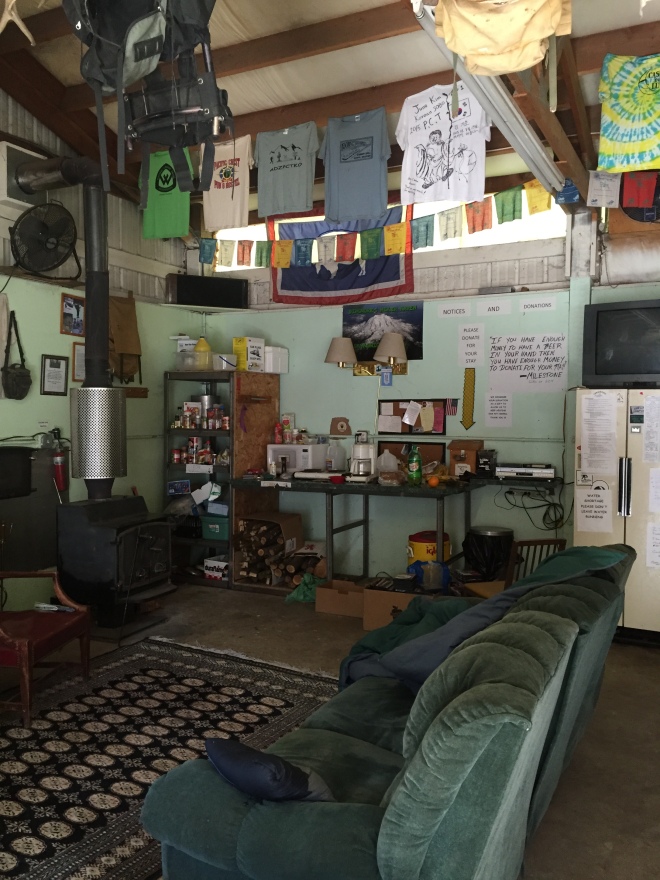